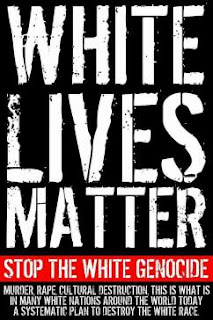 After the accelerated growth of the Black Lives Matter movement, many racists across America have gone on a barnstorming campaign, posting the catch phrase White Lives Matter (WLM), to counter a message they believe is playing a part in a systematic devaluing of white culture –– even orchestrating what they call a “white genocide."

Since then, the Texas-based neo-Nazi group Aryan Renaissance Society (ARS), a member of the white nationalist coalition United Aryan Front, has attempted to capitalize on this momentum by promoting WLM as “a movement dedicated to [the] promotion of the white race,” according to ARS documents.

While its unclear if WLM is a group attempting to create this alleged movement, claiming to have “representatives in various states” or a pet project of ARS, members of ARS encourages sympathetic whites who want to spread the WLM message to contact ARS members.

Tennessean Rebecca Barnette, a member of ARS, ran one of the WLM Facebook pages (until it was shut down). ARS member Scott Lacy appears to manage the White Lives Matter Texas and Oklahoma Community Facebook page, posting family photos on the Facebook profile. To top it off, ARS also claims to be “the leading force behind the WLM Movement.”

Source: The Southern Poverty Law Center
Posted by The G-Man at Friday, March 25, 2016