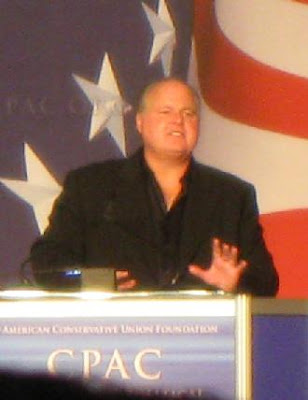 In the past, I’ve totally dismissed the rants of Rush Limbaugh because he proved to be the biggest hypocrite walking after he was caught up in that Oxycotin scandal a few years ago. However, now that the pompous, cigar-smoking, media whore has blamed President Barack Obama for the brutal school bus beating of a white student by black kids, I’ve reached the point where I’ve had enough of “Dough Boy’s” bullshit!

In an excerpt from a recent broadcast, Dough Boy stated the following: “You put your kids on a school bus you expect safety, but in Obama's America the white kids now get beat up with the black kids cheering 'yeah, right on, right on, right on.' Of course everybody said the white kid deserved it. He was born a racist, he's white.” According to the St. Louis Dispatch, the assault was initially regarded as a hate crime by the Belleville police captain. It didn’t take long for him to backtrack from his assessment and state that no determination could be made until a full-scale investigation was conducted. Still, the retraction was irrelevant to Dough Boy, who proceeded with his asinine effort to link President Obama to the vicious attack.

I really don’t like the game Dough Boy is playing. As a matter of fact, I hate it. I’m stating in the strongest terms that he really needs to cut the bullshit! I watched the video of the beating, and the young man was abused in the most horrid manner. Unless the audio recorded the assailants saying “Beat that white-boy down!” there is no way to determine if the attack was racially motivated. Still, the young man didn’t deserve what happened to him and those responsible, even those standing around applauding and cheering, should be arrested and prosecuted to the fullest extent of the law. Period!

Furthermore, I don’t know what sick and twisted world Dough Boy is living in. School bus beat downs occur every day in this country and have for years. I’ve witnessed them firsthand as a child, and some even took place on public buses. The victims and attackers were of every hue, and, like the recent case cited by Dough Boy, students contributed to the melee by cheering and yelling with every punch thrown. Pick any president that served over the last 50 years, and I guarantee you some kid in America got their ass kicked on a school bus for their lunch money, a seat on the bus or because of their race.

Limbaugh’s attempts to stoke the racial fire in America should be viewed as nothing more than delusional acts associated with recovering drug addicts. Yeah, I fucking said it. Go ahead and sue me, Dough Boy! All you’ll get is The G-Man’s old, high school jock strap and a bag of “Tootsie Rolls”. I’ll bet you got your fat ass tuned up a few times, which is why you’re popping “yang” now. Repressed memories are a bitch, huh? You’ve really stooped to an all-time low, Limbaugh, and if you, Glenn Beck, Sean Hannity and all the other members of the “Pretentious Pussies Club” keep attacking President Obama, in racial terms, Americans of all colors will show up at your networks, corner you and give you the beat down of your lives!

Permission: Released to the public domain by the author