The Ballad of Colonel Kelly, USMC

A Poem Honoring U.S. Soldiers Killed in Iraq and Afghanistan

I've had the good fortune of being able to showcase a wide range of work on this blog. You can find anything from investigative news stories and celebrity interviews to stinging commentary and social satire. However, the one thing I have never showcased is my poetry. That's because I didn't want to get laughed at by all the real, hardcore poets out there. After several close friends pleaded with me to post at least one, I decided to do so.

I'm sure many will find this poem controversial and perhaps "un-American", but I'll take my chances. The G-Man has pissed off so many that it's getting to the point where people are going to have to start taking a number. It is being published in order to highlight the difficulties U.S. soldiers face and the unpleasant aspects of war that are not often seen, heard or talked about in American media or our culture. Given this fact, I would like to present this poem as a very, very special Memorial Day tribute to every soldier that died in Iraq and Afghanistan, especially the ones who always tried to do the right thing, under the most extreme circumstances, and represented America in a positive way. May you all rest in peace. 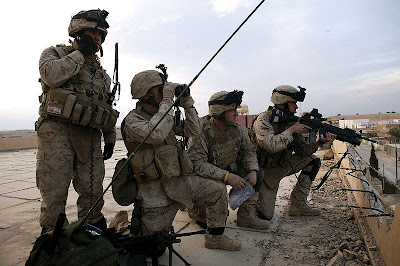 The Ballad of Colonel Kelly, USMC

My name is Col. Kelly, United States Marine
This is a tale of war, and the horrors I have seen.

Like the young Iraqi girl, whose skull was crushed to bits
By a demon insurgent who beat her, and cut off both her tits.

Habib was a local merchant, who served my Hell Hounds bread
His mother found him in the street, a body with no head.

Sgt. Winston was from Dallas, a sniper’s bullet found his eye
He prayed for his wife and baby, as I helplessly watched him die.

PTSD took three of my best, Cpl. Thomas, Smith and Ligger
They sat in a circle, kissed a cross, and simply pulled the trigger.

Sgt. Harris was from Brooklyn, serving his fourth tour in Iraq
His body parts were strewn about, after being shot in the back.

We had orders to storm a mosque, where the enemy laid its claim
Thirty children were killed that day, and I refused to take the blame.

Several soldiers stained our flag, having no regard for human life
Holding an Imam at gunpoint, while fellow soldiers raped his wife.

Car bombs explode around me, the screams are commonplace
An Iraqi boy lies bleeding, with only half a face.

Semper Fidelis is our motto, for honor and country we’ll die
Some Americans support the war, while most denounce the lie.

Back home there’s talk of victory, but in war no one wins
Blood soaks a once sacred land, who will pay for these sins?

None of this matters to me now, as I am finally headed home
Unlike many American veterans, I haven’t been left to roam.