Crushing TMZ and the Paparazzi 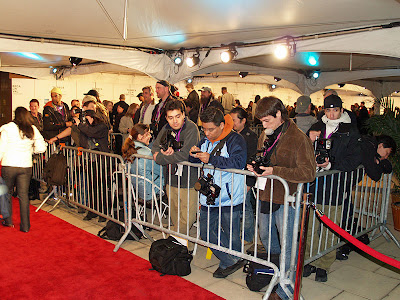 A Plan Every Celebrity Should Consider

I’ve often wondered how I'd react if independent photographers, or those working for major media organizations like TMZ, had a camera in my face or up my ass 24/7. The paparazzi are quick to say that celebrities give up their private life when they become megastars, but I never subscribed to that bullshit. I strongly believe that everyone is entitled to his or her privacy, especially celebrities and their children. I’d probably lose it if hordes of photographers were camped out in front of my home every night hoping for the “money shot"

Knowing me, I’d hire a look-a-like to put a hood over his head and moon them from the bedroom window. They’re so stupid that they’d snap the picture and email it to their editor in a frantic effort to be the first to get it published; leaving me the opportunity to unleash a team of lawyers on their jackass bosses for falsely stating that I was the person in the photo. That’s one way to take them out, but I believe I’ve come up with a four-step plan that every celebrity should implement to shut these ass clowns down once and for all.

Step One: Noted stars such as George Clooney, Tom Hanks, Tobey McGuire, Will Smith and Spike Lee should come together, pool their money and resources, and form a major agency comprised of young, photojournalism graduate students from across the country.

Step Two: Once clearing a background check with local law enforcement, registering their name with the police department and signing an agreement that all photos taken are exclusively owned by the agency, the department would issue an official certification number linking the students to the celebrity-run agency. The department would strictly enforce the certification rule and exercise the right to check the credentials of all photographers at any given time or event.


Step Three: The students would be paid a handsome salary, which could be covered by donations from various celebrities associated with the agency or the movie/television studio the celebrity is signed to, and they would become the official photographers for all exclusive baby or family photos, casual outings, shopping sprees, movie premieres, awards shows and other special events. The agency would then release the photos to all major media publications and news outlets in and outside of the U.S.


Note: Here are two scenarios where the certification number becomes crucial. Agency affiliates could also be placed in front of celebrity homes to protect the stars’ privacy! If a members of the paparazzi appeared at the home or crashed a private event without having any agency affiliation or authorization, they could immediately be arrested, issued an excessive fine and/or jailed.


Step Four: Once the agency is up and running, the celebrities involved in its creation should request an opportunity to speak before Congress to address invasion of privacy issues in an attempt to have laws passed to protect them and their families from being stalked or pursued by the paparazzi on a 24-hour, seven-day-a-week basis.


If these measures are taken, it could put an end to the hysteria and inherent dangers associated with the paparazzi. It is a fact that photographers were in hot pursuit of the late Princess Diana of Wales when tragedy struck. How many others have to die before someone finally says…. enough is enough?