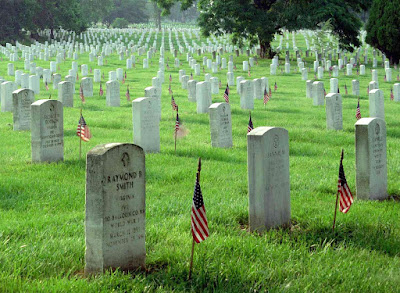 On January 29, 2018, From The G-Man published a special report on Joan Flowers and her nearly 25-year effort to have her father's remains transferred from an unmarked grave in Chicago to Arlington National Cemetery.

A portion of the report stated:

"Joan and others started an extensive Twitter and Internet campaign, including tweets to senators, congressmen, the White House, Bill and Hillary Clinton, Colin Powell and the president and the first lady. For years this woman almost begged anyone that she perceived could help her in her quest.

"She finally received a letter from the Executive Director of Arlington Cemeteries, Kathryn A. Condon, apparently on behalf of President Obama, denying her request. The letter merely said that her father's military service is extremely admirable and greatly appreciated; however, on January 24, 2013 the Secretary of the Army declined to approve your request."

"I just don't understand why my father is being treated this way. He served his country with honor and was proud to do so, even when his country made him serve in a segregated unit," Flowers told From The G-Man. "He's received a number of medals for excellence, but he's being denied the right to be buried with other World War II heroes. It's just not fair or right, and it seems like the White House, the Army and many of the elected officials I've contacted over the years just don't care."

Thank you kindly for your email.

While we certainly appreciate Pvt. Lovejoy's honorable service to our nation, we do not have any updates to share.

From The G-Man placed a call to Meeker on February 6 to obtain an explanation on why Flowers and other family members have never been given an official reason, by the White House or Army officials, for the denial and hopes to receive statements in the days to come.

On January 30, the office of the Congressional Black Caucus, former U.S. Army Lt. Colonel and current Illinois Senator Tammy Duckworth, the Chicago Chapter of the NAACP, the Rainbow Push Coalition, the Chicago Urban League, and several noted veteran's rights organizations were contacted and asked to comment on Pvt. Lovejoy's case. None have responded, but any comments submitted will be published unedited and in their entirety.
Posted by The G-Man at Tuesday, February 06, 2018